Reflections on Extinction: Or what does standing naked on the street have to do with Earth Day?

"And there you have it...: consume, screw, kill. The Homo sapiens way."

This is Daniel Smith in the May 2014 Harper's magazine summing up the key problem in Elizabeth Kolbert's book, The Sixth Extinction: An Unnatural History.

In my own way, I have also diagnosed this problem, hence my non-violent direct action/social media/performance project.

Consume, Screw, Kill: The origins of today's mass extinction is a great article that is, unfortunately, only available to subscribers. I haven't read Kolbert's book but I regularly follow her work covering the "ecological-degradation beat" (Smith) in the New Yorker.

As Smith puts it, "five times in prehistory things went truly pear-shaped for the living." E.g., in "explain it to me like I'm a six-year-old" language: when the dinosaurs all died, that kind of thing. The five past mass extinctions took place over tens of thousands of years. The sixth extinction refers to the one we're creating right now. Apparently it'll only take us a few hundred years to finish up.

Smith: "The International Union for Conservation of Nature, a Switzerland-based organization that monitors the conservation status of more than 71,000 species lists nearly 30 per cent of them as threatened... The widely agreed upon benchmark for a mass-extinction event is a loss of 75 per cent of the planet's bio-mass... if the IUCN's assessment can be taken as a guide to the future—and few doubt that it can, unless extraordinary political and economic measures are taken—the Big Five could become the Big Six as early as 2400 AD."

Through Smith, I also learned of the twitter feed @extinctsymbol: "This symbol represents the extinction crisis. Please create it wherever you can to raise awareness of the rapidly accelerating collapse of global biodiversity." 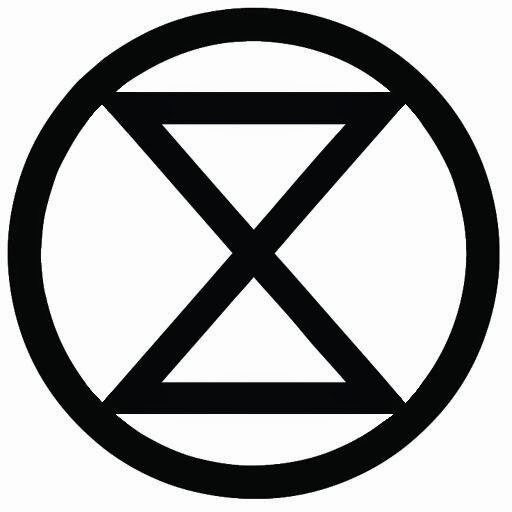 Here's a selection from today's feed:

The Ridgway's hawk is a endangered species. Island of Hispaniola.

I also learned about a Swedish geneticist, Svante Pääbo, who is working to identify a "madness gene." Writes Smith, "Kolbert takes great pains to point out there is something innately immoderate about Homo sapiens."

I don't disagree but I feel the need to add: a) there exist many innately gentle people; b) "indigenous" "matriarchal" societies have existed (some still do) whose people live much more in tune with nature and cause minimal damage; and c) there also exist people, like me, the @extinctsymbol people and many others, who are purposefully working against this immoderation.

I read an article like Smith's and I look at the world surrounding me and I do see insanity. How do people care so very much about getting rid of their muffin tops or what's going on with the Real Housewives when, um, more important things are going on? Why are people confused about why I'm compelled to do what I do?

My own understanding, though, is that people aren't so much insane as repressed/oppressed and desirous of comfort.

Currently the most harmful people on the planet, North Americans, are, by and large, non-violent, law-abiding and tolerant. They are also relatively well-informed (most are, on some level, aware of the basic dire facts) and, still, mostly uninterested in going beyond how they have been trained to behave. The disconnection between knowledge and taking responsibility exists because of what I think of as tribal forces. I.e., my take on tribal behaviour=repressed/oppressed+desirous of comfort.

The whole law-abiding, non-violent, tolerant thing has its points, for sure. But it is based on a trust of/deference to a not-to-be-too-closely-examined-or-questioned "them," which unconsciously becomes a this-is-how-we-do-things (as opposed to we-do-this-because-otherwise-we'd-probably-get-fired-and/or-ostracized), aligned with a handy access to private property (unless, of course, you're homeless or poor, which, needless to say, means you're invisible to the tribe) where one can shut the door on most intrusions. (The fact that so many, once inside, are stuck in their own addictions and/or family dysfunction is related, but another story.)

For me, the absolutely most painful and difficult part of doing the Human Body Project is the feeling of going against my tribe. Without going into detail, I have experienced painful ostracism and I know I also self-ostracize a lot of the time to avoid re-experiencing it. Going against my tribe is why I feel so desperately nervous every time I post a blog or show up on the street for a vigil. I'm writing this the day before I will be doing a vigil and I am feeling very alone.

I've said this before but if I could do what I really want to do (fucking bliss schmiss), I'd be running around naked throwing eggs at everything except kids and trees. I'd start with my own fucking split-level suburban "glass house" and my gas-guzzling Honda Odyssey. I'm as complicit and corrupt as every other adult person in this culture. But, dang, my own kids live in that house and drive in that vehicle. Holy fucking paradoxical stuckness! No wonder my egg-throwing project hasn't started yet.

So when Smith refers to "extraordinary political and economic measures" I do not feel very hopeful. Because extraordinary measures require extraordinary behaviours and extraordinary behaviours tend to be taboo and the clever consumer tribe is not only behaving very much as it should, they have set it up so perfectly that even if a member intentionally misbehaves and wants out, it's quite possible she still has to live in a bank-mortgaged, electrical-heated, split-level, suburban house and drive a gas-guzzling Honda Odyssey (and send out desperate messages on social media from an iMac...)

Invitation: tomorrow's Earth Day Vulnerability Vigil is from 5-6 pm on Blanshard St between Finlayson and Tolmie across from the Mayfair Mall. I'm always grateful when people join me.

Posted by Tasha Diamant at 9:28 PM