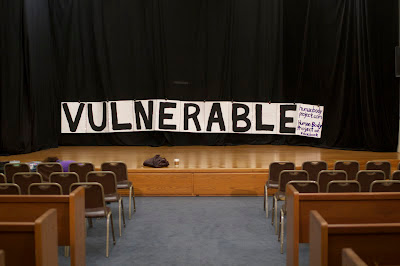 I’ve reviewed Tasha Diamant’s The Human Body Project a number of times, and despite it being an unscripted discussion group rather than a standard theatre production, it’s become a very important part of the Victoria Fringe Fest the past few years. Those who have attended Diamant’s session have walked away with mixed results. Some leave before the full 90-minute session ends, feeling awkward about how a naked lady standing at the front of a room creates an atmosphere for more direct, instinctual conversations about issues that can create feelings of discomfort: vulnerability, fear, love, frustration, despair and hope (to name a few). And others feel as though the 90 minutes have passed in a blink. Yet another brave few choose to get vulnerable alongside Diamant by shedding their own outside layers and adding more unclothed humanity to the proceedings. This year was my turn.

Yes, from the first time I’d attended The Human Body Project (I believe this was my sixth or seventh session), I’ve had a knot in my stomach urging me to break through my fears and become vulnerable. For a number of reasons I probably shouldn’t get into while fully clothed and writing Fringe reviews on a Greyhound bus, I’ve never felt comfortable to get naked in public before (as an act of protest, naturism or any other reason), but this time I knew earlier in the day that at the end of the night I would be up there, naked, in front of a Fringe audience. It’s not about any kind of exhibitionism, or some desperate need to be truly seen, it’s simply about taking everything off and admitting that we cannot control anything in life. We can only do our best in every choice we make and commit to bringing happiness and love and peace to ourselves and others. Whether you remain clothed or not, The Human Body Project is especially helpful if you are attempting to overcome some pretty serious shit, and that applies to all of us, innit?